Fascinating Research “reveals” the Reason that Summer is the healthful Season.

Home Uncategorized Fascinating Research “reveals” the Reason that Summer is the healthful Season.
Uncategorized / 12.7.2015 / No Comment

Fascinating Research “reveals” the Reason that Summer is the healthful Season.

Although most of the readers of this blog probably know why people are healthier and happier during summer, new research show that at least part of the reason in that human immunity is stronger during that season.[i] An interesting anti-inflammatory transcription factor, called ARNTL, has about 50% greater gene activity levels in the summer than in the winter. This would mean that infectious diseases would be more likely to be squelched in the summer, and it could provide a reason for the excess of inflammatory diseases like influenza in the winter. Of course, vitamin D levels and sunlight exposure are also lower in winter, and it is likely that these factors work in concert.

One of the researchers, John Todd, stated the following regarding sunlight exposure, inflammation, and vitamin D. “Given that our immune systems appear to put us at greater risk of disease related to excessive inflammation in colder, darker months, and given the benefits we already understand from vitamin D, it is perhaps understandable that people want to head off for some ‘winter sun’ to improve their health and well-being.”[ii]

Dr. Todd’s advice sounds great to me. Let’s all head to Cabo to catch some life-saving sunlight!

[ii] Agata Blaszczak-Boxe. People Are Healthier in the Summer (and Here’s Why).  http://www.livescience.com/50806-seasonal-variation-human-genes-immune-inflammation.html 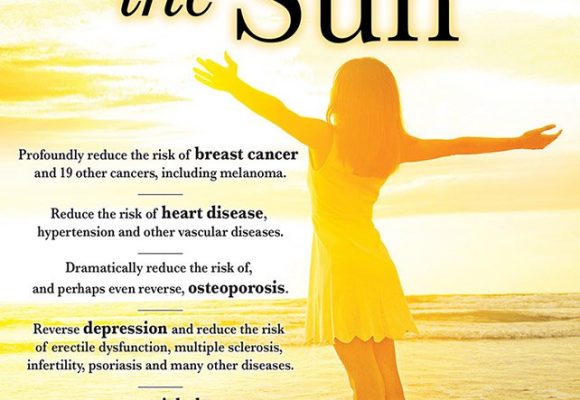 Sunlight or vitamin D or both? Sunlight is the answer.
Sun Exposure in Youth Helps Prevent Multiple Sclerosis