Antioxidants are popular as supplements, and they are found many foods, but especially in fruits and vegetables. Because they are critical to good nutrition, let’s first consider what they do to a prevent cancer. First of all, what are they? They are substances that eliminate free-radical atoms and molecules. These radicals are formed by combining oxygen with stable atoms, hence the term “oxidation.”  Therefore, we must also understand the free radical in order to understand the antioxidant’s importance.

Antioxidants and the notorious free radical

A free radical is a highly unstable atom capable of independent existence and having at least one unpaired electron in its outer shell.[1] So, when an atom loses an electron, it becomes unstable in an attempt to reestablish balance. Because this atom “craves” to have its balance restored, it will “steal” an electron from another atom to achieve stability. Therefore, the atom from which the electron is stolen becomes another free radical. The first atom now becomes stable because it has snatched an electron. Consequently, however, the atom from which the electron is snatched becomes another free radical.

So this process repeats innumerable times.[2] And this chain reaction cannot cease until another substance, with an extra electron to “give away,” steps in. That substance finally furnishes the electron that produces stability. That substance, of course, is an antioxidant.

Thus, antioxidants can furnish electrons to stabilize free radicals without causing damage. Hence, they are like the hero who gives his life for the team and then passes on.

As mentioned, the process of free-radical formation is known as oxidation, because free radicals are usually formed due to oxygen molecules, which are unstable.  This is possible because oxygen easily combines with other substances.  Oxygen gives us life, but its byproducts, if not controlled, can quickly end life.  As an iron pipe rusts, it is because it succumbing to the free-radical attack of oxidation.  When anything burns, free radicals form.  Due to oxidation, a single cigarette creates about one quadrillion free-radical attacks.[3] Cooking creates massive quantities of free radicals. Breathing, heart beat and exercise also create oxidation. It is most noteworthy to understand that without antioxidants, our metabolic processes would shortly kill us because of oxidation.

Oxidation damages DNA, and unchecked, it causes cancer. Therefore, the fact that smoking kills so many people attests to an obvious reality. Because smokers have insufficient levels of antioxidants to handle the free-radical load, they succumb to cancer.  In fact, smoking is a major cause of non-melanoma skin cancers (NMSC); the greater the number of cigarettes smoked, the greater is the risk of skin cancer.[4] So, how important are antioxidants to cancer prevention, especially non-melanoma skin cancer? The research on antioxidants and skin cancer expatiates on this subject.[5]

The research just mentioned tells us that NMSC accounts for more that half of all diagnoses of cancer. And basal cell skin cancer (BCC) accounts for 70-80% of skin tumors. So, the researchers set out to determine the influence of antioxidants on NMSC. They tested 84 individuals and divided them into two groups: 1. a control group of healthy people, and 2. a case group of those who were undergoing surgery for BCC. In addition, they measured the blood of each group for free-radical markers, and then they compared the two groups. Also, they assessed the usual dietary intake of the subjects. As a result they discovered that the case group had significantly higher markers of oxidative stress compared with controls. While these results were impressive, there were other interesting results:

Other results regarding antioxidants

The power of fruits and veggies.

Vegetables and fruits rich in antioxidants are protective against various diseases. We know this due to a plethora of research and observations. This research adds more information indicating that we should stop blaming the sun for skin cancer and clean up our diets. See sunlightinstitute.org for more information on skin cancer and nutrition, And to learn more about the benefits of sunlight, read my book, Embrace the Sun, available at Amazon. https://www.amazon.com/Embrace-Sun-Marc-B-Sorenson/dp/069207600X 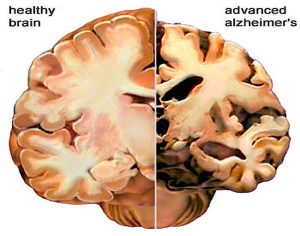 What is Alzheimer’s disease?

Alzheimer’s disease is a plague in our modern world. It is a progressive mental deterioration that can occur in middle or old age, due to degeneration of the brain. Alzheimer’s is also the most common cause of premature senility. The United States will see a 44 percent increase in individuals with Alzheimer’s disease by 2025.[1] First of all, the disease occurs because amyloid plaques appear in brain tissue. These plaques consist of tangles of amyloid protein (a complex protein resembling starch) in nervous tissue. They are pathological markers of the disease that are found in spaces between the brain’s nerve cells. As a result of these plaques, the brain loses its ability to function properly.

Our experience with Alzheimer’s sufferers

My wife, Vicki, and I worked with residents of an assisted-care facility for over three years. We conducted and supervised church meetings for many disabled, elderly people. Because we worked up close and personally with these residents, we understood the devastating effects of Alzheimer’s. Many of these residents could not find their way to the church meeting room without our assistance. Therefore, they obviously had the disease. Additionally, it was manifest because many of them were unable to recognize us after our being away for a day. Also, they were prone to simply get up and leave the building and be found (if lucky) wandering outside.

First of all, research indicates that vitamin D and omega 3 fatty acids may help in removing the aforementioned plaques.[2] Therefore, they reduce the risk or severity of AD. So, the disease may be lessened by sun exposure, since 90% of vitamin D produced in the US population is due to sun exposure.[3]

Hence, it is no surprise that the latest research paper found high risk in low-sunlight countries. Consequently, the researchers stated: “According to sunlight data, we can conclude that countries with low average sunlight have high AD (Alzheimer’s disease) death rate.[4]”

Are there other indications that sun exposure is associate to reduced risk?

Sun exposure directly correlates to non-melanoma skin cancer (NMSC). Therefore, the latter is often used as a sun-exposure indicator. It is thus compared with various diseases to evaluate the relationship between them and sun exposure. A 2013 article, published in the journal Neurology, reveals that among people with NMSC, the risk of Alzheimer’s disease (AD) is profoundly decreased:[5] Those with NMSC had a 79% reduction in disease risk. Stated another way, those without NMSC had about five times the risk of Alzheimer’s! Of course, this demonstrates the importance of sun exposure in reducing the risk, whether due to vitamin D production of from other photoproducts of the sun.

So, what is the bottom line? Be sure to obtain some unscreened, non-burning sun exposure and keep your marbles!

[3] Reichrath J. The challenge resulting from positive and negative effects of sun: how much solar UV exposure is appropriate to balance between risks of vitamin D deficiency and skin cancer? Prog Biophys Mol Biol 2006;92(1):9-16

Non-Melanoma Skin Cancer (NMSC), other Cancers and Sun Exposure. What is the Truth?

A 2016 paper in the British Journal of Dermatology showed that NMSC (also known as common skin cancer) had a positive association with cancers such as breast cancer, lung cancer and lymphoma.[1] Since NMSC is also associated with increased sun exposure, one might be inclined to say that these cancers are caused by such exposure. This is troubling, as many research papers have showed a reduced risk of most internal cancer with greater sun exposure. For example, breast cancer was the second type of cancer for which an inverse correlation between mortality rates and sun exposure was identified in the United States.[2] And, when assessing sun-exposure habits in a study of 5,000 women, scientists determined that those who lived in the sunniest areas, and who also had the highest sun exposure, had a 33% reduction in breast cancer rates compared to those who had the least exposure.[3] A subsequent study by the same group found “that a high sun exposure index was associated with reduced risk of advanced breast cancer among women with light skin pigmentation.”[4] The reduced risk was 47%. Numerous additional studies have demonstrated a reduction of the risk breast cancer among women who are regularly exposed to the sun. A discussion or these studies will me available in the book, Embrace the Sun, which should be available before the end of the 2016.

As for lung cancer, a geographical study in China demonstrated that lung cancer mortality showed a strong inverse correlation of risk with sun exposure, with an estimated 12% fall per each 10 milliwatts per meter squared per nanometer (a measurement of sun intensity) increase in UVB irradiance (sun exposure) even if adjusted for smoking.[5]

Now let’s consider lymphoma. The most recent research shows that there is an inverse correlation between Hodgkin lymphoma (HL) and the highest vs. lowest lifetime, childhood and adulthood factors: sun exposure, sun-lamp exposure, and sunburn. [1] The pooled analysis showed an odds ratio of .56, or in other words, a 44% reduced risk of contracting the disease.[6] Two items particularly stand out in this research: (1) Sun-lamp use correlated to a reduced risk of the disease—a positive result for the much maligned tanning industry—and (2) sunburn also correlated to a reduced risk. Of course, no one would recommend sun-burning—it simply serves a surrogate measurement for a high degree of sun exposure. Sun exposure can easily be used in high quantities—without burning—by moving out of the sun when the skin begins to redden, and then coming back later, after the skin has adjusted and started to tan.

Therefore, there is an interesting dichotomy between the idea that sun exposure may contribute to the three mentioned cancers, and the fact that all of these cancers have been shown to associate with low sun exposure, and be protected against by higher sun exposure.

So what is the answer? Dr. Bill Grant has found it. When people contract NMSC, they are advised to avoid the sun, thus setting themselves up for increased cancer risk.[7] Thanks again to Dr. Grant for his immediate solution to this dilemma.

There is more than sufficient research to show conclusively that most major cancers are prevented by plenty of sun exposure. Don’t be misled. Be sure to obtain some safe sun exposure whenever possible.

[7] Grant WB. Increased risk of non-cutaneous malignancy after diagnosis of non-melanoma skin cancer may be due to sun avoidance. Br J Dermatol. 2016 Jul 15. [Epub ahead of print].

I am not suggesting that we contract NMSC in order to prevent melanoma. Correct nutritional habits can also reduce the risk of both NMSC and melanoma,[1] and it should be remembered that in the case that someone contracts an NMSC, it can be easily removed. Melanoma, however, can be deadly. The best bet is to eat wisely and obtain plenty of regular sun exposure so that risk of melanoma is dramatically decreased.

NMSC is often used as a marker for sunlight exposure and is compared with various diseases beyond cancer to determine if sunlight exposure associates to those diseases. Dr. Bill Grant just sent me a paper showing that among people over 70 with NMSC, the risk of Alzheimer’s disease (AD) is profoundly decreased;[2] in fact those with NMSC had a 79% reduced risk of Alzheimer’s. Or stated another way, those without NMSC had about five times the risk of the disease. Of course, this demonstrates the value of sunlight in reducing AD.

Let’s protect our minds as we age by getting plenty of non-burning sunlight! Search the Sunlight Institute site to learn more about how Alzheimer’s is influenced by sunlight and vitamin D.