Hypertension, or chronic high blood pressure, is determined by the amount of blood the heart pumps and the amount of resistance to blood flow in the arteries. The more blood the heart pumps and the tighter the arteries, the higher the blood pressure.[1] The top number on a blood-pressure measurement, stated in millimeters of mercury (mm/Hg), is called systolic pressure, and the lower number is called diastolic pressure. Hypertension is defined as having a blood pressure > 140/90 mm/Hg. 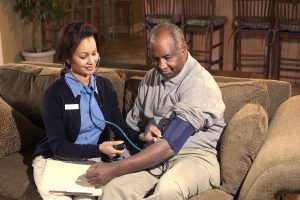 Thirty-one percent of US adults are hypertensive.[2] Hypertension can damage arterial walls and can eventually lead to an increased risk of death from heart disease, heart failure, and other arterial diseases. It is also associated to a higher risk of kidney disease, irregular heart rhythms, osteoporosis, cognitive dysfunction, painful intercourse and stroke.[3] Conventional textbook theory holds that blood pressure is regulated by the brain, blood vessels, or kidney, but recent evidence suggests it could be regulated in the skin, and sun exposure plays a role in controlling hypertension.[4]

One of the earlier studies of hypertension and sun showed hypertension increased linearly at increasing distances from the equator.[5] One study of hypertensive subjects shows that blood pressure levels average 165/90 in winter but 134/74 in the summer, and both stroke and heart attack rates double in the winter.[6] Even in children, blood pressure is higher in winter than summer.[7] This, of course, is indicative of a protective role of sun exposure on hypertension.

UVB light treatments with sun lamps have also been shown to substantially lower blood pressure in 24 hours, and over six weeks to raise serum 25(OH)D levels of vitamin D by 162%, while lowering both systolic and diastolic pressure by six points.[8]

However, it is important to again mention that there is another important player in the relationship between hypertension and sun. Ultraviolet A (UVA) light (part of sunlight) stimulation of the skin causes the release of nitric oxide (NO) from pre-formed stores of NO in the skin. NO is a potent vasodilator, and when released into the arteries by UVA stimulation, causes increased blood flow and lowered blood pressure.[9], [10]

Safe sun exposure, along with plenty of vegetable and fruit consumption, may enable you to say goodbye to blood-pressure problems.