How important is sun exposure for bone strength?

How important is sun exposure for bone strength?

Lack of vitamin D, which is produced by sun exposure, leads to rickets, osteoporosis, osteomalacia and other bone diseases. In addition, research well after the first discovery of vitamin D has shown that vitamin D deficiency and sunlight deprivation also lead to many cancers, heart disease and multiple additional maladies. Now, as the world has modernized, the population is moving indoors, and even in the areas that are sunny throughout the year, sunlight exposure and vitamin D deficiency is increasing, both in rural and urban populations. The bones become so weakened without regular sun exposure, that the slightest movement may cause a fracture. As an example, the mother of an acquaintance of mine—a woman who avoided the sun—turned over in bed one night and broke her hip. Osteoporosis often destroys all quality or life for those who suffer it. 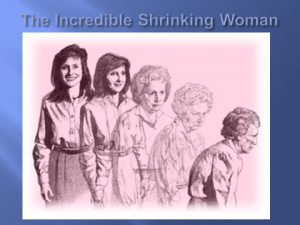 The importance of the sun in maintaining and producing strong bones has been known since antiquity. Dr. Richard Hobday, author of The Healing Sun, writes the following comments along with a history in an online article.[1] “Traditionally, sunlight deprivation has been linked with weak or brittle bones. One of the earliest references to this was made more than two thousand years ago by the Greek historian Herodotus (480-425 BC), who noted a marked difference between the remains of the Egyptian and Persian casualties at the site of battle of Pelusium which took place in 525 BC:

‘At the place where this battle was fought I saw a very odd thing, which the natives had told me about. The bones still lay there, those of the Persian dead separate from those of the Egyptian, just as they were originally divided, and I noticed that the skulls of the Persians were so thin that the merest touch with a pebble will pierce them, but those of the Egyptians, on the other hand, are so tough that it is hardly possible to break them with a blow from a stone. I was told, very credibly, that the reason was that the Egyptians shave their heads from childhood, so that the bone of the skull is indurated by the action of the sun — this is why they hardly ever go bald, baldness being rarer in Egypt than anywhere else. This, then, explains the thickness of their skulls; and the thinness of the Persian’s skulls rests upon a similar principle: namely that they have always worn felt skull -caps, to guard their heads from the sun.’

And here is a perhaps the transcendent study on hip fracture and sun exposure: research in Spain showed that women who were sun seekers had only about one-eleventh the risk of hip fracture as those who stayed indoors[2] (See the chart below). 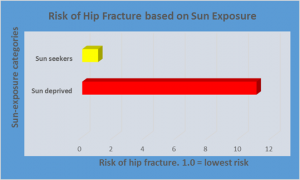 That is very powerful evidence of the efficacy of sun in preventing weak bones. In stark contrast to this research are studies done on women who completely avoid the sun and suffer from osteomalacia. Osteomalacia is a soft-bone disease known as adult rickets, resulting from severe vitamin D deficiency, which deficiency prevents bone from properly mineralizing. Women who seldom go outdoors, or who are nearly always fully covered with clothing, have an extremely high incidence of osteomalacia at a very young age, even if they live in geographical areas with abundant sunlight.[3] [4] If one is never exposed to the available sun, the sun will not be able to produce its beneficial effects on the body, so one may as well live at the North Pole.

Sunbed use also is associated with stronger bones and higher vitamin D levels. An excellent study compared 50 people who used sunbeds regularly with 106 who did not.[5] The sunbed group had 90% higher vitamin D, significantly higher bone density and lower PTH levels (high PTH levels are associated with lower bone mass). The users had healthful vitamin D levels of 46 ng/ml [115 nmol/L] compared to only 24 ng/ml [60 nmol/L] for those who did not regularly use sunbeds.

Scientists at one time believed that sunlight and vitamin D were good only for preventing rickets, osteoporosis and other bone weaknesses. That belief has been supplanted by myriad research studies that show the efficacy of both sun exposure and vitamin D repletion on protection against numerous additional diseases. Nevertheless, we should never forget the extraordinary, never-changing value of sun exposure to maintaining a strong skeleton well into old age.