What is metabolic syndrome?

Metabolic syndrome is a group of physical conditions that are predictors of disease. And, it can also be an indicator that disease is already present. Hence, when someone suffers from metabolic syndrome, they will have many dangerous disorders. High blood pressure, obesity, high cholesterol, high triglycerides, Low HDL, glucose intolerance and insulin resistance. Furthermore, these disorders are linked to increased risk of cardiovascular disease and type 2 diabetes. And, they are often indicative of upcoming health disasters. 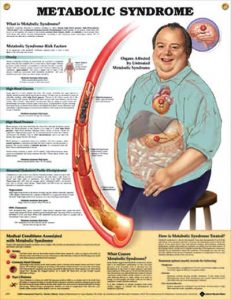 How metabolic syndrome is influenced by sunlight.

First of all, how does this tie into the benefits of sunlight? A recent study showed that a program designed to raise vitamin D levels reduced existing metabolic syndrome remarkably.[1] Fifty-nine people with metabolic syndrome participated in the study. It is most noteworthy that these subjects were told to expose themselves regularly to sunlight and eat foods high in vitamin D. Metabolic syndrome, as a result, decreased by about half after one year on this regimen.

Does other research associate metabolic syndrome with sun exposure?

One major aspect of metabolic syndrome is obesity. Hence, research demonstrating a reduction of obesity also indicates a reduction of metabolic syndrome. So, let’s mention another scientific paper that “sheds more light” on the subject of obesity.[2] This research was conducted on mice with shaved backs that were placed on a high-fat diet and then exposed to non-burning ultraviolet radiation (UVR). UVR is one of the types of light that is produced by sunlight. Especially relevant is that the mice should have gained weight rapidly. But the weight gain was impressively reduced when they were exposed to UVR. The treatment achieved a 30-40% reduction in weight gain, compared to the expected weight gain with the high-fat diet. Therefore, the “sun treatment” reduced the risk of obesity. And, it also reduced metabolic syndrome.

Other metabolic syndrome changes shown in this research

In conclusion to this research, the investigators stated their findings. “These studies suggest UVR [sun exposure] may be an effective means of suppressing the development of obesity and MetS, through mechanisms independent of vitamin D but dependent on other UVR-induced mediators such as NO.”

It seems like there is no end to the miracles of regular, non-burning sun exposure. Consequently, do not disregard the sun and its health-giving effects. Just don’t burn. For more information, read my book, Embrace the Sun, available at Amazon.

Sepsis, anyone? Soak up some sun!
Sunshine – Health Facts about Vitamin D and Sunlight Exposure