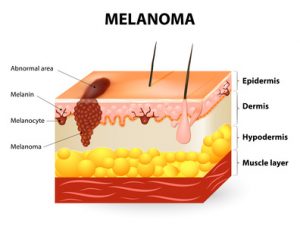 The risk directly associates with low levels of vitamin D. That is the conclusion of recent study published in the European Journal of Cancer.[1] The investigators measured the blood vitamin D levels of 137 subjects who had been diagnosed with melanoma. They collected the blood samples at the time of diagnosis of the disease. Another group of 99 healthy subjects served as the control group. The investigators collected the samples of the control group between October and April. The scientists then compared the blood collections of the melanoma group with those of the control group. They then determined whether vitamin D levels had an association with melanoma risk.

The results were as follows:

The scientists then adjusted the data for possible confounding factors such as age, sex and body mass. Then, they performed an analysis that showed the following:

Now, this is the most important point about melanoma risk:

In addition, this research proves conclusively that sun deprivation is a major cause of melanoma. I say this because about 90% of serum vitamin D is produced by sun exposure to the skin.[2] So, the aforementioned research is really research on sun exposure. It shows that regular sun exposure leads to a profound reduction in melanoma risk. Therefore, Vitamin D levels are surrogate measurements for sun exposure in nearly every case.

Could sunlight increase health through photoproducts beyond vitamin D?

In conclusion: My new book, Embrace the Sun (coauthored by Dr. William Grant), notes that sun exposure provides more than vitamin D. It also provides other photoproducts such as nitric oxide, serotonin, endorphin, and brain-derived neurotropic factor (BDNF). All of these photoproducts are vital to human health. Could these photoproducts have a positive and protective effect against melanoma risk beyond vitamin D? And, vitamin D produced by sunlight may be superior to that given in pill form.

Finally, this research gives us one more reason to embrace the sun safely without burning. And who would have thought that safe sunlight could be one of the best prophylactics against melanoma risk?

[2] Reichrath J. The challenge resulting from positive and negative effects of sun: how much solar UV exposure is appropriate to balance between risks of vitamin D deficiency and skin cancer? Prog Biophys Mol Biol 2006;92(1):9-16

melanomasun exposuresunlightvitamin d
Related Posts
Viagra Use is Associated with a Profound increase in the Risk of Melanoma.
The Health Benefits of Sun Worshipping.
Redheads are more prone to melanoma regardless of sunlight exposure