Insufficient sunlight is wreaking havoc on health and ruining the enjoyment sunlight provides. Yet, we choose to live in air-conditioned homes, play many of our sports in covered buildings and drive covered cars. In addition, advertisements persuade us that we must wear sunscreen anytime we venture outdoors. Some also suggest that we wear it at night. Thus, they think we can prevent “sun damage” that continues after daytime outdoor sun exposure.  It is obvious that the greater part of our population suffers sunlight deprivation. Or, as a recent scientific review called it, “insufficient sun exposure.”

The paper, Insufficient Sun Exposure Has Become a Real Public Health Problem, exposes the damage done due to sun deprivation.

First of all, the authors begin by stating that deaths due to insufficient sunlight are staggering. They amount to 340,000 yearly deaths in the U.S. and 480,000 in Europe. They then delineate the source of those deaths, first declaring a list of major maladies that spread illness and misery. The list includes breast and colorectal cancer, hypertension, CVD, metabolic syndrome, MS, Alzheimer’s, autism, asthma, type 1 diabetes and myopia. In addition, excessive mortality (death) was also on the list due to of insufficient sunlight. Yet, although the list of these sun-sensitive diseases is impressive, I must say I was disappointed. They did not mention another 15 cancers and other diseases associated closely to insufficient sunlight. For those cancers, and additional diseases, read the book, Embrace the Sun, which I wrote with Dr. William Grant.

For decades, scientists designated vitamin D as the only photoproduct of sunlight that produced benefits.

One of the paper’s salient points regarding insufficient sunlight and is transcendentally important. I have been emphasizing the point for years, yet much of the world ignores it. The point is that vitamin D is a vital and important photoproduct of sun exposure. Yet, other photoproducts of sunlight are equally vital. This statement by the authors tends to clarify the truth about Vitamin D and its place with human health. “Vitamin D has long been considered the principal mediator of beneficial effects of sun exposure. However, oral vitamin D supplementation has not been convincingly shown to prevent the above conditions; thus, serum 25(OH)D as an indicator of vitamin D status may be a proxy for and not a mediator of beneficial effects of sun exposure.”

The authors also mention that nitric oxide, and direct effects of ultraviolet radiation, may work independently of vitamin D. For example, nitric oxide is a colorless gas, formed by sunlight exposure to  endothelial cells in the skin. It acts as a potent vasodilator and lowers blood pressure. In addition, it is also a potent antioxidant. Of course, insufficient sunlight leads to a lack of nitric oxide, vitamin D and other vital photoproducts.

Here are the explanations used in the review regarding different diseases associated with insufficient sun exposure.  Nevertheless, these diseases do not necessarily improve due to vitamin D supplements. Note: the term nmol/L means nanomoles/ per liter, and U.S. measurements are in ng/ml (nanograms per milliliter). To convert nmol/L to ng/ml, multiply by 2.5.

The review also states that insufficient sunlight is a risk factor for death similar to that of smoking. In addition, people with serum vitamin D levels less than 22 nmol/L, have twice the risk of all-cause death. That is, compared to those whose levels were greater than 125 nmol/ (about 50 ng/ml).  Remember, vitamin D levels in these cases are really proxies for sun exposure.

In their review, the authors note CVD has been the leading cause of death globally for the last three decades. In addition, hypertension, or high blood pressure is the number-one risk factor for (CVD). The review states that a growing body of evidence shows an inverse relationship between sunlight exposure, blood pressure and CVD. The authors indicate that a mediator other than vitamin D probably contributes to CVD mortality. Thus, nitric oxide, a sun-exposure product and potent vasodilator, may be the chemical that lowers blood pressure and reduces CVD. The researchers further state that those with habitual low sun exposure double the risk of cardiovascular death compared with those who receive the greatest sun exposure. Obviously, insufficient sunlight can be a deadly contributor to CVD due to an inability to produce sufficient nitric oxide. 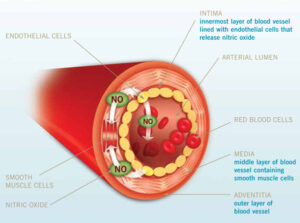 MetS is a cluster of maladies including glucose intolerance, insulin resistance and high fasting insulin levels. MetS also may include nonalcoholic fatty liver disease, obesity, and cholesterol. All of these factors contribute to heart disease and diabetes. The review noted that UVR suppressed obesity and type 2 diabetes, yet, vitamin D supplementation did not produce the same benefits. The review also suggested that sunlight exposure is an effective suppressor of obesity and MetS through vitamin D-independent mechanisms.

Other diseases, due to insufficient sunlight, to follow later:

Other diseases in the review also indicated an association to insufficient sunlight. I will expatiate on those diseases in a future blog. Until then, be sure to obtain your share of non-burning, regular sun exposure to your skin. In addition, as autumn arrives, you will need a different source of vitamin D production. This is due to the sun’s UVB light being unavailable in autumn and winter in mid to high latitude areas. Therefore, the suggestion is to use a sunbed, which produces vast quantities of vitamin D. Sunbeds also produce vast quantities of UVA light that stimulate nitric oxide in the skin. Therefore, sunbeds are the perfect answer for those times when there is little sunlight availability.

For more information on the healthful effects of sun exposure, visit Sunlight Institute and read my book, Embrace the Sun.